Taxation of business profits on the basis of economic adherence has always been the underlying basis of existing international taxation rules as both the residence and source countries claim the right to taxation. Economists gave primacy to the economic allegiance rather than physical location and made it clear that physical presence was important only to the extent it represented the economic location.

Earlier, as per the provisions of section 6(3) of The Income Tax Act, 1961, a foreign company was regarded as a tax resident of India only if it was ‘wholly controlled and managed’ in India. In 2015, the residence test was amended which prescribed that a foreign company will be considered as an Indian tax resident if its POEM was found to be situated in India. 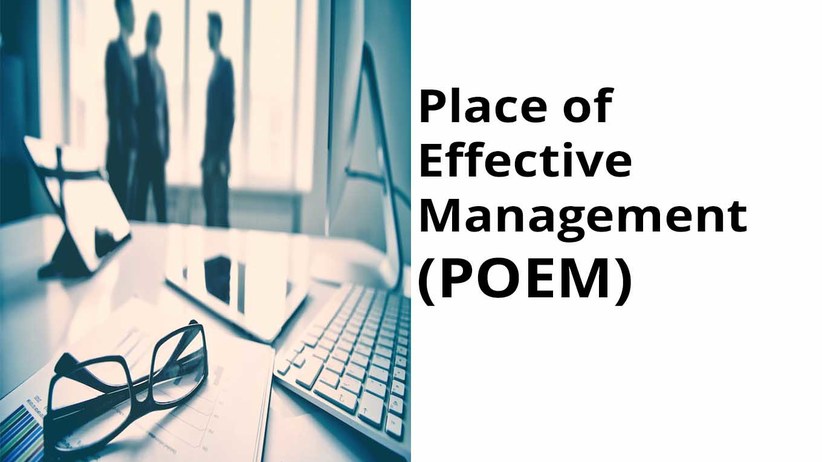 The POEM test has come into force from the financial year 2016-17 effective from 01.4.2017, with amendment to section 6(3) which provided that ‘A company is said to be a resident in India in any previous year, if—

(i) it is an Indian company; or
(ii) its place of effective management, in that year, is in India.’

The concept of POEM has been introduced to align the domestic laws with international standards.On 24th January, 2017, the Central Board of Direct Taxes (CBDT) had issued Circular no. 06/2017 mentioning guidelines for determination of POEM. Further, on 22nd June, 2018, Notification no. 29/2018 under section 115JH was issued, providing computation mechanism for total income, treatment of unabsorbed depreciation, set-off or carry forward and set-off of losses, collection and recovery and special provisions relating to avoidance of tax if a foreign entity is said to have POEM in India.

The process of determination of POEM would be primarily based on the fact as to whether or not the company is engaged in Active Business Outside India (ABOI). 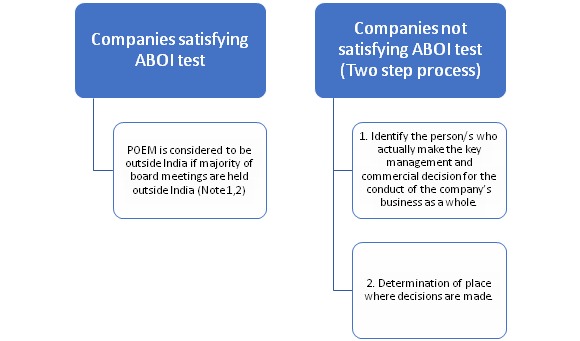 1. Any foreign subsidiary of an Indian holding company merely complying with its global policy as laid down for the entire group would, by itself, not attract applicability of POEM as per Circular No.25 Of 2017 dated October 23, 2017.

2. Where the Board of directors of the company are standing aside and not exercising their powers of management and such powers are being exercised by either the holding company or any other person (s) resident in India, then the place of effective management shall be considered to be in India.

3. For identification of POEM, location of the head office, place where board regularly meets, location of members of executive committee or senior management are to be considered.

4. If the identification of POEM is not possible due to the primary factors, then the following mentioned secondary factors should be taken into consideration:

Period to be considered for the purpose of determination of ABOI:

 For the purpose of determination of whether an entity is engaged in ABOI, the average of the data of the previous three years should be considered.

Issues like determination of POEM, non-applicability of POEM, POEM of a foreign holding company in India, initiation of POEM proceedings and open ended issues shall be dealt in Part-II to this blog.

This content is meant for information only and should not be considered as an advice or opinion, or otherwise. AKGVG & Associates does not intend to advertise its services through this.